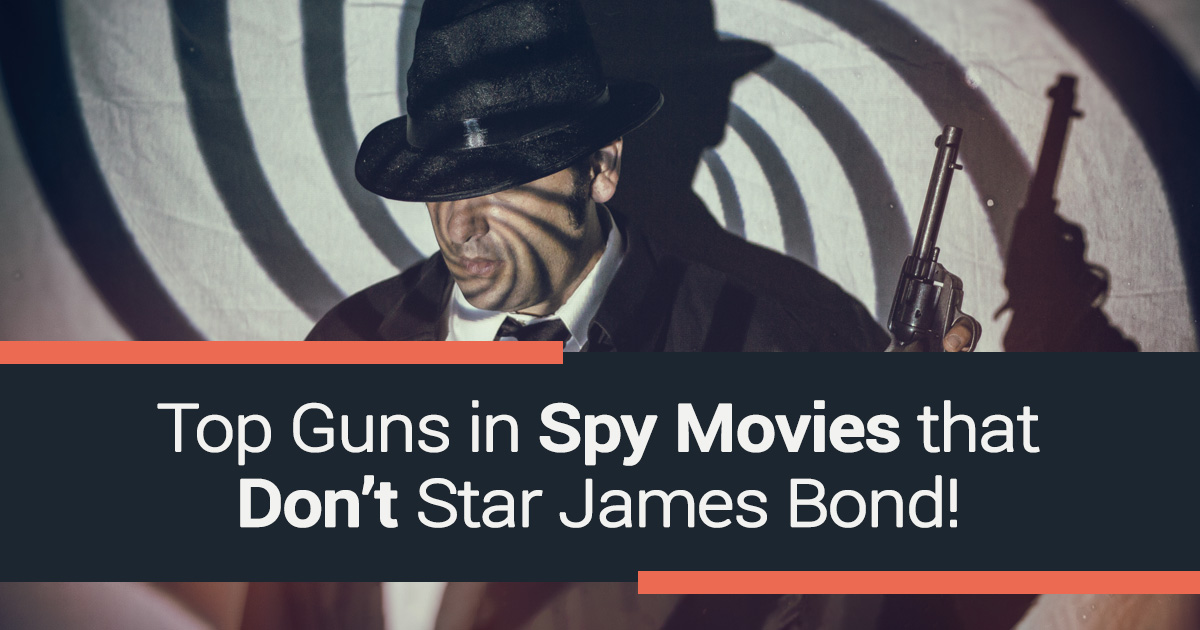 As far as movie genres go, you just can’t beat a spy movie! These great films portray the exciting espionage activities of government agents, risking everything to avoid being caught by their enemies. Sometimes, they even save the world!

Providing an entertaining mix of escapism, technological thrills, and exotic locales, it’s no wonder the spy film is popular with audiences all over the world. But for us, the main attraction of any spy film are the gunfights!

So, here’s our pick of top guns in spy movies and, just for fun, we picked movies that don’t star James Bond. As always, beware of spoilers!

Do you love classic spy movies? Then it’s safe to say you’ll love Mission Impossible. There are so many iconic scenes in this 1996 film, adapted from the popular 1960’s spy series of the same name.

After being framed for the murder of his team, IMF spy Ethan Hunt (played by Tom Cruise) must track down the real killer and clear his name. Hunt is one of our favourite spy movie protagonists, and we especially love his choice of firearm – the Beretta 8000 Cougar, manufactured in Italy.

These compact pistols first hit the scene in 1994 as a less bulky alternative to the full-sized Beretta 92. They were designed to offer a compromise between concealability, ease of carrying, accuracy, and firepower – the perfect handgun for a spy.

Check it out in action here at 1 minute and 54 seconds:

Let’s go back in time a bit for one of Alfred Hitchcock’s 1959 spy thriller, North by Northwest. In it, a case of mistaken identity pulls advertising executive Roger Thornhill into a web of espionage and murder. It’s not only a fantastic spy film, but it’s also considered to be one of the greatest movies of all time.

This vintage firearm is a compact, hammerless, striker-fired, semi-automatic single-action pistol. Made by the Colt’s Manufacturing Company from 1908 to 1948, it was marketed as a small concealable firearm that could be easily tucked into a vest pocket (hence the name) for unobtrusive carry.

The Colt Model 1908 had a starring role in the film when it was used by spy Phillip Vandamm’s two henchmen, Valerian and Licht, as they kidnap Roger. Later in the movie, Eve Kendall uses this baby in an iconic scene at Mt. Rushmore.

Check out Eve in action at the 1 minute and 37-second mark of this great clip (beware of spoilers for the end of the film):

When it comes to spy movies that don’t star James Bond, we can’t overlook the modern-day Bourne Trilogy. This franchise stars Matt Damon as top spy Jason Bourne (Hmmm, who else shares his initials?) In The Bourne Ultimatum, the third installment of the franchise, Bourne uses a SIG Pro SP2022 compact pistol in Moscow to fend off the Russian police in a pharmacy.

You can check out this beauty in action in the clip below at 2 minutes and 25 seconds:

Hey, hang on a minute!

For all you savvy gun-enthusiasts and avid fans of this thrilling spy movie, did you catch the continuity error?

The scene in the video clip is set just after the car chase in the second film, The Bourne Supremacy, where Bourne has been using a SIG-Sauer P225. But without warning, the firearm changes to a SIG Pro SP2022. Guess someone should have been paying closer attention…

That said, in our opinion, both the SIG Pro SP2022 and the SIG-Sauer P225 are excellent choices for compact pistols.

That’s right; not all spy movies have to be edge-of-your-seat. Some can be funny, and there’s no arguing that one of the most famous spy spoofs of our time is the famous Austin Powers. Austin Powers is a flat out parody of 1960s-era James Bond films, mocking and subverting many of the tropes of the time like villainous lairs and ridiculous names for female characters. Not to mention that Austin uses a Walther PPK, just like James Bond.

This semi-automatic handgun is noteworthy for chambering the largest centerfire cartridge of any magazine-fed, self-loading pistol. This beauty was designed and developed by Magnum Research Inc. Later, the design was refined, and Israel Military Industries manufactured the pistols until 1995.

As Goldmember makes his escape, he uses the Desert Eagle to hold Austin Powers at gunpoint. Luckily, Foxxy Cleopatra knocks it out of his hand. Unfortunately, one of Goldmembers goons picks it up and hands it back to him before Goldmember leaves in the time machine (Uh… There is also time travel. It’s a complicated movie). But, we can’t blame him for saving such a fantastic firearm.

Here’s a still-frame of the scene in question:

Now that you’ve got a taste of some genuinely great firearms featured in spy movies, why not take a look at GTA Guns Online Auctions or any of our other services. If you have any questions or want to learn more about us, don’t hesitate to get in touch!