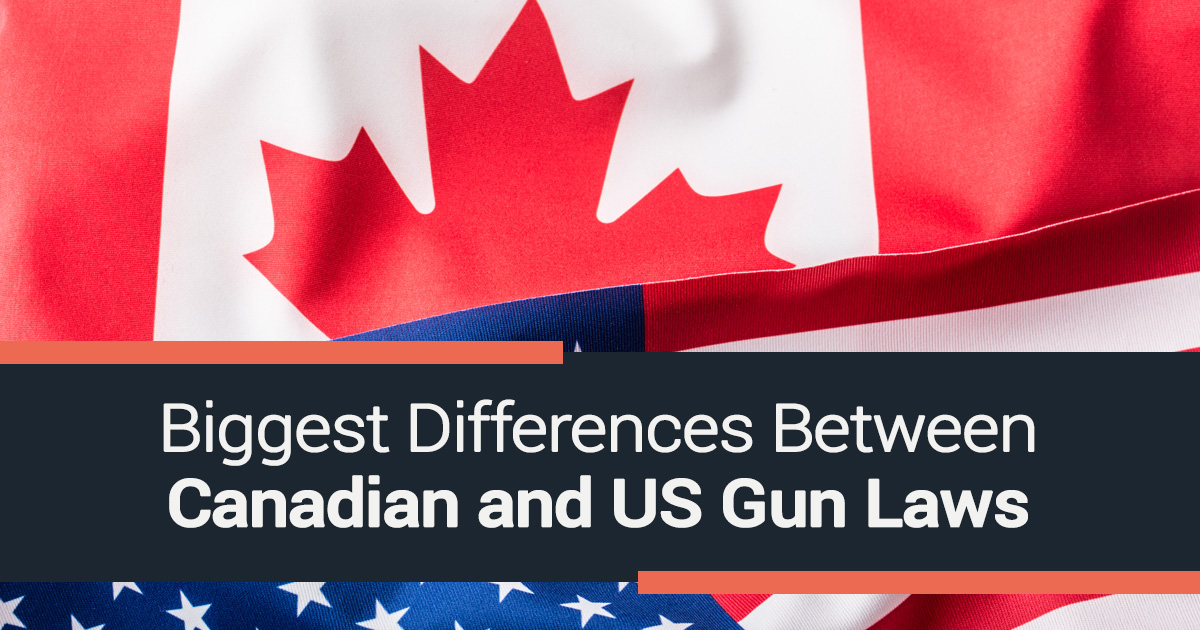 Do you know that almost every gun used in an American mass shooting is legally available to buy in Canada?

Despite this, Canada doesn’t even come close to suffering the same rate of mass shootings as the United States.

In part, it’s because Canada’s gun laws are much stricter than the laws in the US. Let’s take a closer look at the biggest differences between the legal status of Canadian and US guns.

Obtaining and Possessing a Gun

In Canada, gun laws are federally regulated, while the United States allows each state to establish their own laws.

Unlike the United States, Canada has a mandatory waiting period that can be up to two weeks long. So, if you’re trying to buy a restricted firearm, the gun store must send out the paperwork or an application on your behalf and wait for approval from the province’s Chief Firearms Office (CFO).

Once your restricted firearm is in your possession, you’ll have many rules to follow, such as making sure the proper paperwork is always on you when you’re in possession of the gun and not making any stops on the way to the shooting range (the only place you can legally shoot a gun).

In the United States, all a person needs to do is walk into a gun store licenced by the Federal government, show proof of ID, file Form 4473 (the Firearm Transaction Record Over-the-Counter application), and leave the store with the gun.

In Canada, the process to obtain and possess a gun is rather long and complex. Part of this process involves a meticulous background check on the person interested in purchasing the firearm. A Canadian background check requires a minimum of 28 days. Additionally, the person buying the gun needs to pass a safety test, and a third-party reference is also requested.

In the United States, not only is purchasing and owning a firearm quite simple, but a licence is not always required. This means that background checks aren’t always necessary for a gun purchase. Moreover, background checks are often done as quickly as possible and can be superficial. Typically, there is no waiting period for a background check or to obtain a licence or permit. Some guns can even be bought and carried without needing a licence at all, although laws and regulations concerning this matter vary from state to state.

In Canada, a gun can be carried in public only by those who require a firearm for their job (ex: police, etc.) In the United States, everyone has the constitutional right to bear arms. Owning a gun in the United States is thought to be a fundamental right, whereas Canada does not have such a strong culture surrounding the possession of a firearm.

As the United States has such a strong gun culture, they also have a strong presence of powerful firearm lobbies, notably the National Rifle Association (NRA). Every year, the NRA invests millions of dollars into politics and supports selected candidates with large donations during the election period. Thus, the NRA exerts a strong influence over vital players in the American government.

In Canada, gun lobbies are much weaker and have less influence on the government.

In Canada, 30, 50, and 100-round capacity magazines are not something a private citizen can access. With an Automatic Rifle, Canada is limited to 10 rounds at the very most, though more often than not, it’s five-round magazines. In the United States, these limitations on magazine size don’t exist.

We Understand the Law

At GTA Guns, we’re not only fully licensed and insured, but we understand the ins and outs of Canada’s gun laws. We can help you legally sell any firearms in your possession, even if you don’t have a valid licence! We are also familiar with American gun laws, allowing us access to the vast American market through our firearm auctions. We even provide services for executors and widows to help them register the firearms in their estate as per the law.

We pride ourselves on offering all our clients a straight-forward, easy-to-navigate process so if you’re in the market to buy or sell a firearm, you’ll want to make sure GTA Guns is involved!

Call us today to learn more about our services or to ask any questions you may have. We look forward to serving you!