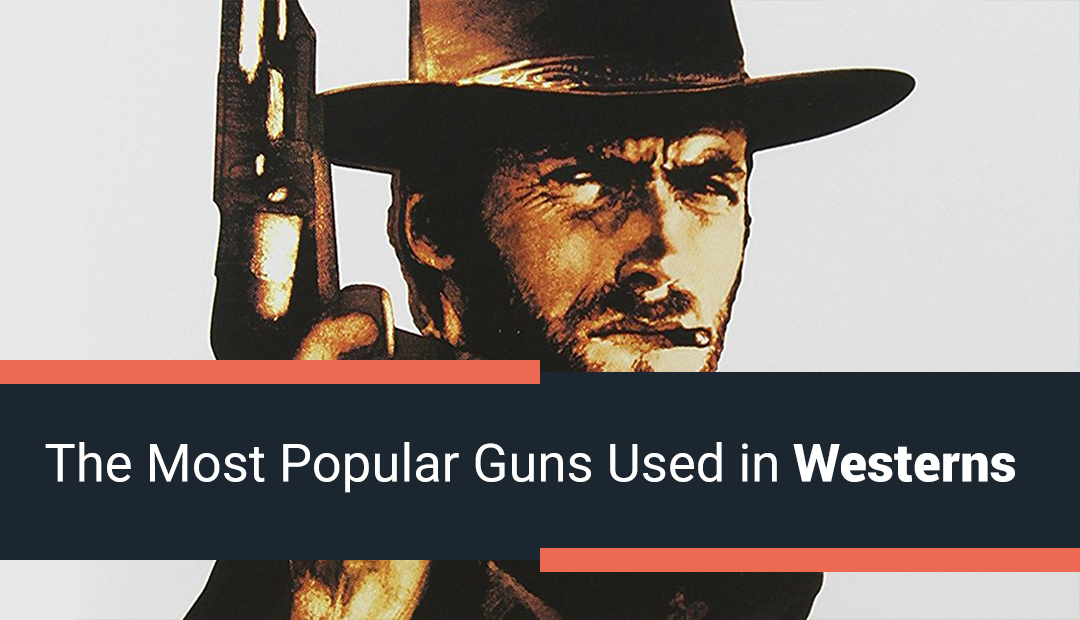 Who doesn’t love a Western?

One of the most iconic genre of movies ever, much of the golden age of cinema was built on the popularity of Westerns. Throughout the first-half of the 20th century, Westerns were by far audience’s movie genre of choice. Western movies inspired everything from hit television shows, like Gunsmoke, to theme park attractions, like Frontierland at Disneyland. One of the biggest draws of Westerns were the iconic weapons used by Old West gunslingers, most of which can easily be recognized by anyone with even a passing interest in firearms. Here are some of the most common firearms that you might see in Westerns:

Easily the most commonly seen firearm in Westerns, the Single Action Army was also one of the most popular firearms in reality throughout the latter-half of the 19th century. Also known as the Colt .45, the Frontiersman, and the Colt Peacemaker, if someone was carrying a gun on their hip in the Old West, odds are that it was a Single Action Army. If you pick almost any Western movie at random, someone at some point in it will be shooting this gun.

There are countless films that feature the Single Action Army, but some of the best known are High Noon, Gunfight at the O.K. Corral, A Fistful of Dollars, For a Few Dollars More, Once Upon a Time in the West, Butch Cassidy and the Sundance Kid, The Quick and the Dead, 3:10 to Yuma, and many, many more.

Realistically speaking though, if you want the actor who shot the Single Action Army with the most style and grit in the history of film, don’t look any further than Clint Eastwood. Watch his very first scene in his very first Western, A Fistful of Dollars and you will see a western icon being born.

How important was the Winchester Model 1873? Well, it is better known as “the gun that won the west”!

The Winchester Model 1973 was considered to be the most popular rifle throughout the 19th century. It was so popular, in fact, that it was manufactured until 1923. Very affordable and extremely customizable, these firearms were found all over the west. Even today, it is easily one of the most recognizable firearms from the Wild West and reproductions are still very popular.

The Winchester Model 1873 was used in films like How the West Was Won, Westworld, Tombstone, The Assassination of Jesse James by the Coward Robert Ford, and many, many others. However, the film that probably best features the Winchester Model 1973 is, well, the movie that was named after it! In Winchester ‘73, it appeared as a custom-engraved model that was “so perfect”, each was called “one of a thousand” (In reality, each rifle in this thousand series was sold for an incredibly expensive $100).

Smith & Wesson Schofield is a single-action, cartridge-firing, top-break revolver popular through the latter-half of the 19th century. Used by the US military in the early-1870s, they were phased out as they could not fire the .45 Colt rounds that were primarily used by the army. A number of different variations were made, including three different models with improving designs, an Australian model, and a Russian model.

Oddly, the Smith & Wesson Schofield wasn’t often used in older Westerns, but has had a resurgence in popularity the last few years. The firearm is featured prominently in Unforgiven, Tombstone, The Assassination of Jesse James by the Coward Robert Ford, and 3:10 to Yuma.

Historically speaking, the Smith & Wesson Schofield may best be known as the gun that Bob Ford used to kill Jesse James, as seen in the film The Assassination of Jesse James by the Coward Robert Ford (spoiler alert probably not necessary, as that is the title of the film).

Although not seen quite as often in Westerns, the Remington 1858 New Army played a huge role in the history of America. It was used primarily by Union Army during the Civil War, and was preferred over the Cold Army Model 1860 by those soldiers and officers who could afford the firearm.

The Remington 1858 New Army was used extensively in the films Gone with the Wind; Red River; The Good, the Bad, and the Ugly; and The Valley of Death. Cartridge conversion models were also used in How the West Was Won, Django Unchained, and as recently as in The Dark Tower in 2017.

In this scene from The Good, the Bad, and the Ugly, the character of Angel Eyes uses a Remington 1858 New Army when “interrogating” a former confederate soldier. It… doesn’t end well for the soldier.

Although these guns are all from over a hundred years ago, you can still see them, and reproductions, being used today in Cowboy Action Shooting. At these fun and family-friendly events, firearm enthusiasts adopt old West-style nicknames and engage in a number of shooting stages, each with different rules using a variety of period-appropriate firearms. If you ever get the chance to go, we fully recommend it! It’s a rootin’ tootin’ good time!

If you’d like to learn about GTA Guns Auctions, or any of our other services, don’t hesitate to contact us with any questions.