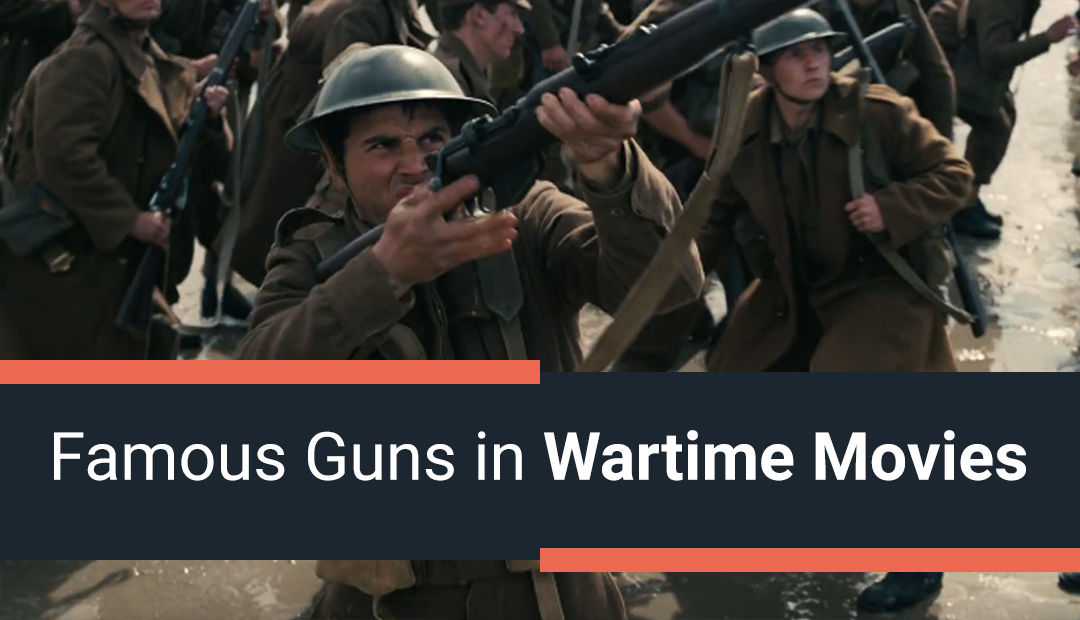 Outside of westerns, war movies are probably where firearms make the most frequent, and realistic, appearances on the silver screen. Unlike in action movies where firearms are basically magic with unlimited ammo and perfect aim, firearms in war films usually reflect the gritty and horrible reality of what it was like on the ground (with some exceptions, which we will be mentioning soon!)

Although you could technically classify a movie like Braveheart as a “wartime movie”, we are obviously going to be focusing on far more recent wars. The two most popular settings for wartime movies tend to be World War II and Vietnam, each war utilizing completely different weapons from different eras. Here are some of the most famous firearms you can find in war films!

Oh, and beware of spoilers in both the descriptions and in the clips of the films. We don’t want to ruin the best part of the movie for you!

Remember when we were talking about the unrealistic use of firearms in a war movie? How about the Clint Eastwood duel where he wields a pair of MP40s, mowing down Nazi troops?

Yes, that is completely ridiculous (though also awesome), but all of the firearms used in this WWII espionage film, starring Richard Burton and Clint Eastwood, are period accurate. Along with the MP40, a submachine gun developed and used by Axis forces, you can also find guns like the Walther PPK (famously used by James Bond), the MG42, a German machine gun used during the war, and a small, silenced Beretta 950 Jetfire, held by Mary Ure in the film.

If you’ve ever wanted to watch Clint Eastwood fire two MP40s at once, this is the clip for you!

OK, if we are going to be talking about ridiculous, but fantastically fun, war films, you have to mention Quentin Tarantino’s WWII epic Inglourious Basterds about a plot to kill the leaders of Nazi Germany back in 1941.

Although the usual WWII firearms like the MP40, Walther PPK, the Luger P08, and the Walther P38 are featured, it is some of the more… flamboyant guns that get the lion’s share of the attention in this movie. Like the Sawed-Off Over/Under Shotgun used during the jailbreak, or the featured M1928 Tommy Gun.

But one of the best gun scenes in the film is this fantastic standoff where the firearms are all pointed where the sun don’t shine.

One of the most realistic WWII films ever made, Christopher Nolan’s Dunkirk tells the story of Project Dynamo, the evacuation of Belgian, British, and French troops from Dunkirk in 1940. The firearms in the movie are incredibly period accurate, both in form and function.

Most British soldiers in the film are equipped with Lee-Enfield No. 1 Mk. III rifles, that were standard issue at the time. Similarly, French troops in the film were equipped with MAS-36 rifles, just like they were in reality. The MP40 makes an appearance on the German side, of course. And in terms of heavy firepower, you can find the Bren Mk1, used as an anti-aircraft gun mounted on a British Royal Navy destroyer.

Full of brilliant scenes, we just want to give you a taste of it with the trailer for the film. Really, you should watch this movie!

Allegedly, shooting conditions during the filming of this Francis Ford Coppola movie about the Vietnam War was about as close to war as you could get. Alcoholism, rampant drug use, and a rapidly bloated budget aside, they also had to deal with a typhoon destroying vital sets, Martin Sheen suffering from a heart attack during shooting, and Marlon Brando refusing to even read the script, instead preferring to improvise his lines.

That said, all of this resulted in one of the most harrowing movies ever made, perfectly encapsulating the hell of war. In terms of firearms, the M16A1 rifle makes multiple appearances, used by many American soldiers throughout the film. The majority of the soldiers of the North Vietnamese Army, along with Colonel Kurtz’s men, are using Norinco Type 56 assault rifles. And if you want real firepower, check out the GE M134 Minigun mounted to a UH-1 Huey helicopter during one of the most well-known scenes in the film.

Speaking of that scene, we hope you like the musical theme, Ride Of The Valkyries…

Martin Sheen passes the torch to his son, Charlie Sheen, who stars in this semi-biographical, Oscar-award winning film about Vietnam, written and directed by Oliver Stone. The film became a critical darling in the mid-80s due to its brilliant performances and unflinching look at what it was like on the ground during the Vietnam War.

Most of the American soldiers in the film carry the M16A1, standard issue to most American troops. To make their characters stand apart from the rest, SSG Elias and SSG Barnes both use Colt Model 653Ps, which were never actually used during the Vietnam War, creating a major anachronism. The Norinco Type 56, used by the North Vietnamese Army, makes another appearance. As for handguns, all officers are equipped with M1911A1s.

Not a film to shy away from the disturbing nature of what occurred during the Vietnam War, this scene shows the M1911A1 being used to terrifying effect without a single shot being fired…

Although Stanley Kubrick’s Full Metal Jacket was compared to Platoon, as it was released a year after that award-winning film hit the scene, it is actually a VERY different kind of Vietnam film.

The movie is sort of two films in one. The first half focuses on basic training, following two recruits nicknamed Joker and Pyle. It brutally shows the emotional and mental toll that basic training can take on someone who isn’t ready for it. This section also features the film debut of Lee Ermey, a former U.S. Marine Drill Instructor, who improvised all of his own dialogue while training the recruits. The second half of the film follows Sergeant Joker as a war correspondent in South Vietnam at the beginning of the Tet Offensive.

Without a doubt, the most famous gun in this film is the M14, one given to each of the recruits during training. Each develops their own “relationship” with their M14, some, unfortunately, more than others. Pyle’s description of the way this firearm could be used gave the film its name, “Seven-six-two millimetre, Full Metal Jacket.”

The scene that closes the first half of the film might just be one of the most intense and harrowing scenes that Kubrick ever shot.

So, there’s some of our favourite war movies and the guns featured in them. Did we miss your favourite? Please feel free to comment below! And if you’d like to learn more about GTA Guns Auctions, or any of our other services, don’t hesitate to contact us with any questions you may have.