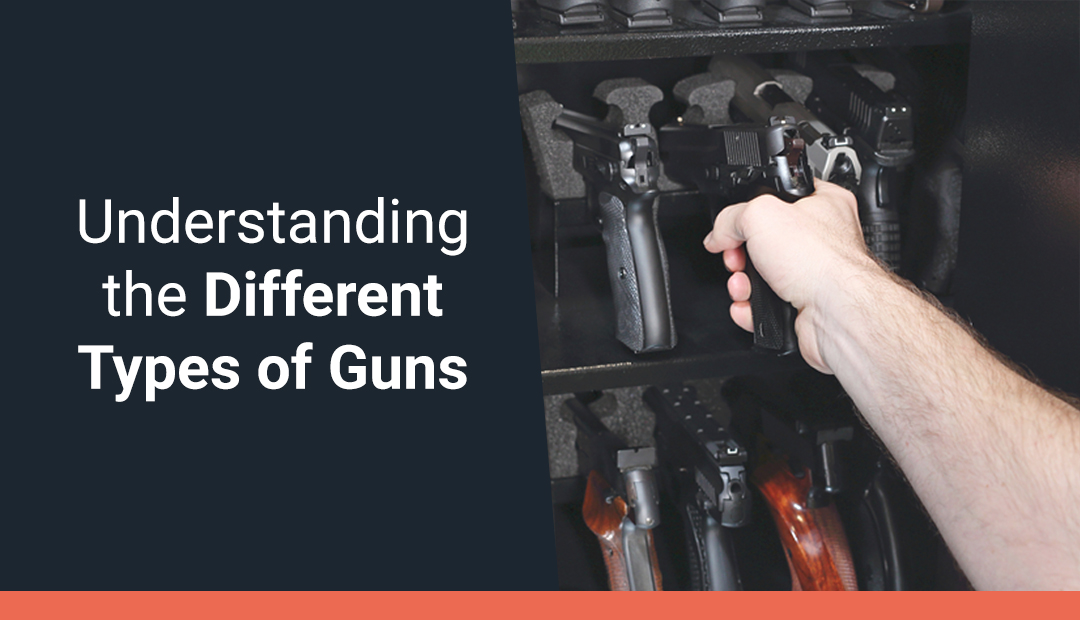 How much do you really know about guns?

At GTA Guns, we work with folks with various levels of firearms knowledge. For example, while a collector who might spend thousands of dollars purchasing a firearm in an auction might have an encyclopedic knowledge of firearms, an executor who is handling a Will might not know anything about them.

That’s why we believe a part of our job is to educate our buyers and sellers about firearms. It’s the reason why every listing in our auctions is packed full of information, including a detailed breakdown of the gun’s condition with both internal and external images. The more our buyers know, the better informed they can be about their purchasing decisions.

But for those who are newcomers to firearm auctions, we thought a brief primer about the different types of firearms might be useful!

Generally, there are two basic configurations that you will find with firearms: handguns and long guns.

If you can use a firearm with a single hand, guess what? You likely have a handgun!

There are several different types of long guns, including:

Rifles: The term “rifles” comes from the rifling of the barrel, which refers to the lengthwise grooves cut inside the barrel that allow for accuracy and speed. Most hunters prefer to use rifles when hunting for larger game. Subcategories of rifles include sniper rifles, assault rifles, automatic rifles, and battle rifles.

Shotguns: A shotgun tends to have a straight, smooth barrel designed to create a cluster of impact points. They tend to have more limited range and capacity than a rifle but offer a larger impact area. Most hunters prefer to use shotguns when hunting birds.

Machine Guns: A machine gun is a fully-automatic firearm that uses belt-fed ammunition. They come in a wide range of calibres, offering a large ammo capacity and a rapid rate of fire. Subcategories of machine guns can include submachine guns and personal defence weapons (PDW).

Carbines: A carbine is very similar to a rifle, but tends to be smaller with a shorter barrel and a less powerful cartridge. Law enforcement and the military often use carbines for close-range situations.

Whether a firearm is a handgun or a long gun, they may have different functionality that allows them to specialize. Here are some of the most common:

Manual: There are two general categories of manual firearms. Single shots can only be fired once, then need to be reloaded. Repeating can be fired multiple times but must be reloaded via an internal mechanism between shots.

Pump Action: This firearm requires a pumping action to replace the spent round in the chamber with a new one.

Lever Action: The same idea as pump-action, but uses a lever rather than pumping.

Semi-Automatic: This type will automatically replace and load a new bullet after being fired. However, only one bullet can be shot with each pull of the trigger.

Automatic: This firearm type will fire rounds continuously, so long as the trigger is being held down.

Selective Fire: This type can change from semi-automatic to automatic. Other modes might be available, such as small bursts of rounds.

This is, of course, an abbreviated look at the types of firearms available today. In Canada, they fall into one of three categories: Non-restricted, restricted, and prohibited.

To learn more about what kinds of firearms we can legally sell through GTA Guns auctions, we advise you to contact us for more information. We would, of course, highly recommend that you do not attempt to sell a prohibited firearm through online forums or classifieds, as this could result in criminal charges.

So, are you ready to list your firearms through GTA Guns auctions? If so, please feel free to get in contact with us today! And if you have any other questions about our GTA Guns auctions, other services, or types of firearms, we would be happy to assist you!