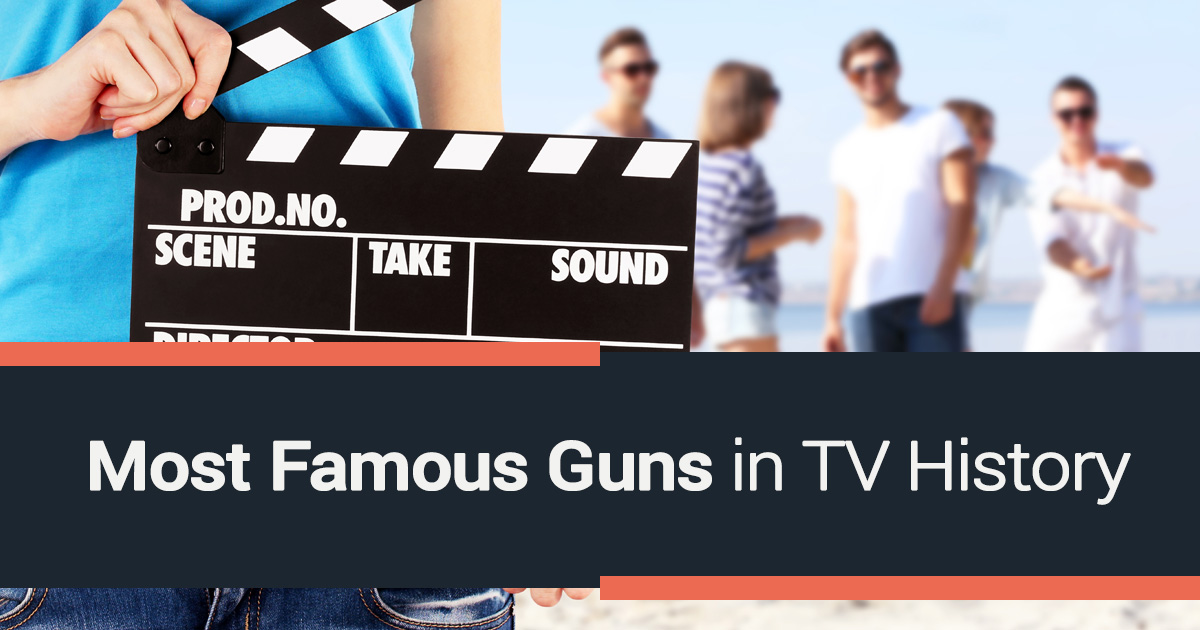 Have you ever noticed how the protagonists on non-military TV shows are usually armed with only their trusty handgun? Whenever you see a character whip out their piece, you know they mean business!

On TV, handguns are portrayed as wonder weapons, with equal firepower to a rifle (and often infinite ammo). Nine times out of ten, a hero equipped with a handgun can easily take down dozens of bad guys equipped with much more firepower and win the day.

And that fantasy is part of what makes some TV shows so great. It’s that edge of your seat excitement as you watch the good guy takes down the bad guy! That’s also why action and crime shows are so popular. Not only do they feature some pretty cool firearms, but they also keep you in suspense waiting eagerly for the next moment (or next week, if it’s a two-parter)!

With that in mind, here are some of the most famous guns in TV history and the shows we love to see them on.

In all fairness, handguns do offer certain advantages for TV show heroes. Handguns are small, concealable, and easy to use. Many heroes still carry a handgun as their primary firearm even when better armaments are available.

One of the most famous guns in TV history is the trusty Glock 19. In fact, the Glock 19 is a standard weapon of the New York Police Department, which is why you can see this compact pistol chambered for 9x19mm on many shows that feature the police. For example, Detective Rey Curtis from the popular crime drama Law and Order uses a Glock 19 throughout the series.

David Duchovny’s character, FBI Special Agent Fox Mulder, also uses a Glock 19 throughout the popular sci-fi series the X-files. And so too does Agent Olivia Murray on the police drama The Shield.

The Glock 19 in 9mm Luger is ideal for TV as a result of its reduced dimensions in comparison to the standard sized option. Not only can the Glock 19 be used as a conventional service pistol, but it’s also perfect for use as a backup firearm or for concealed carry purposes (always helpful when you’re undercover).

Although handguns are a go-to option for many TV shows, one of the most iconic guns in TV history is the sawed-off double-barreled shotgun. This shotgun is a breech loaded, dual triggered, two barrel shotgun, ready to take down bad guys (and demonic monsters or zombies) with an echoing blast!

Many TV characters carry a sawed-off shotgun because, although the shorter barrel reduces the range, it gives it a larger shot dispersal. Sawed-off double-barreled shotguns are also easier to conceal and use in small spaces. Plus, they just look incredibly cool on camera.

The sawed-off double-barreled shotgun goes a long way back in TV history. For example, it’s been used in the 1960 show The Twilight Zone. Steve Brand can be seen holding a 12 Gauge Double Barreled Shotgun that Charlie Farnsworth uses to shoot at what he thinks is an alien invader.

Sci-fi shows aren’t the only genre that loves to feature this firearm. Ron Swanson from the hit comedy Parks and Recreation has a (hopefully) deactivated sawed-off double-barreled shotgun mounted on a swivel on his desk.

One of the most recent uses of the double-barrel shotgun (specifically a sawed-off Remington 12-gauge double-barrel shotgun) was in the horror/comedy show Ash Vs. the Evil Dead. This television continuation of the Evil Dead film series (starring returning star Bruce Campbell as Ash Williams) features over-the-top comedic violence, just like in the classic movies. As you can see, Ash’s finesse with his “Boomstick” is still intact, even after all these years (Warning: there is mild violence in this clip).

Plus, cartoons also feature this shotgun. For example, the popular adult cartoon, Archer, uses this famous gun. For instance, in Pipeline Fever, secret agent Sterling Archer “borrows” a sawed-off double-barreled shotgun from his servant Woodhouse and smuggles it onto his plane. The sky marshall sees it happen and mistakes Archer for a hijacker. Archer later uses the gun to forcefully commandeer an airboat. It’s one wild episode to watch!

You can’t have action on-screen without a machine gun! At least that’s how it goes for many TV shows that feature the M60 machine gun, which was developed in the mid-eighties as a lightweight version for the US Marine Corps. In real life, the reduced weight resulted in decreased reliability and heating problems, leading it to be largely replaced in service by the M240. But that certainly isn’t the case in many TV shows.

The M60 machine gun was featured on popular shows such as Stargate SG-1, where the U.S. military personnel carried these firearms or on Battlestar Galactica, where Colonial Marine used the M60.

So now that you’ve got a taste of some of the most famous guns in TV history, why not check out GTA Guns online auctions and add one of these great pieces to your collection?

And please don’t hesitate to get in touch with us today if you have questions about our online auctions or any of our other services. We’re always happy to help!