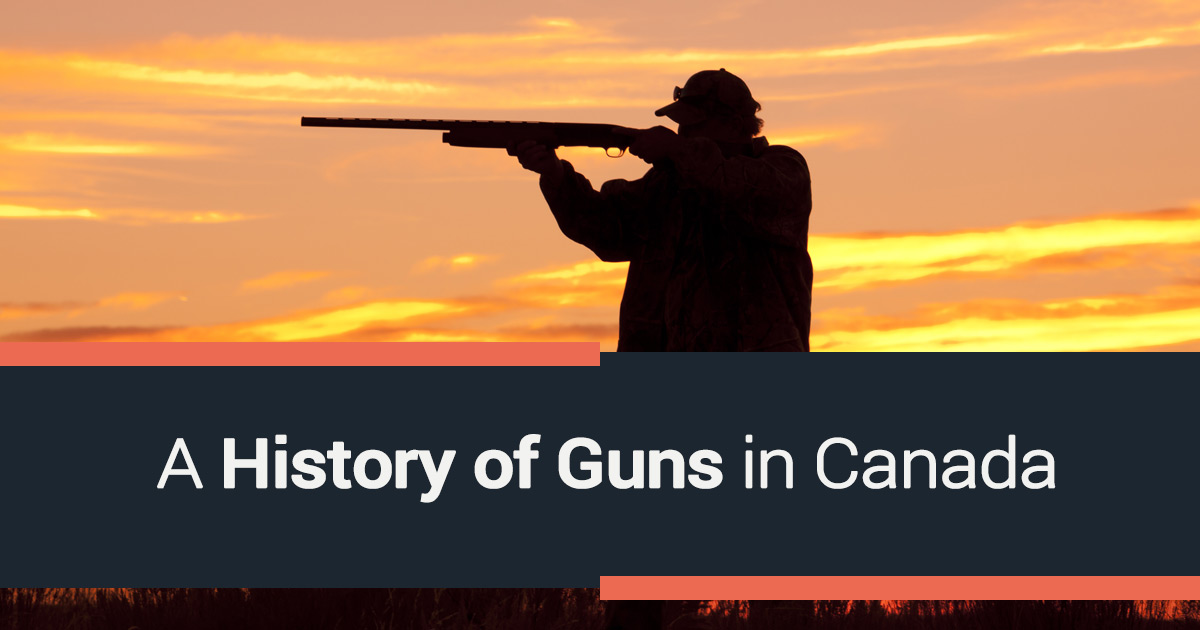 How much do you know about Canada’s history with firearms?

Long before Confederation in 1867, guns were playing a significant role in shaping the events that would lead to the country we know and love today. Firearms were essential to tame the Canadian frontier and were considered to be necessary items for hunting and protection for citizens throughout the 17th, 18th, and 19th centuries.

So, just how do firearms fit into our history? Let’s take a look back…

Before we delve into a history of firearms in Canada, it’s important to note where the gun was born: China.

In 1986, a team of researchers led by Dr. Joseph Neeham from Cambridge University found proof that the combination of chemicals needed to make gunpowder was known in China by AD 900. Two hundred years later, the exact proportions of chemicals that produced the necessary gas to discharge a projectile was discovered. Finally, in AD 1280, the Chinese invented the gun barrel to contain the powder, and the firearm was officially born.

This invention made its way to the Middle East, Africa, Europe, and, eventually, to the New World!

The Early Days of Firearms

The progression of early firearms was very slow. It wasn’t until the early 1400s that the first mechanical device for a firearm was invented in Europe. This innovation was made up of a lighted wick of twisted hemp that used a lever to be drawn into a pan at the breech.

In 1608, around the time Samuel de Champlain was establishing Québec, a French gunsmith named Marin le Bourgeoys was tinkering with a cost-effective and efficient lock mechanism known as the flintlock.

His invention represented a real advance in metallurgical knowledge, and it quickly became the most common and advanced form of firearm available. Both the settlers of America and the native Americans were quick to adopt it.

Firearms in Canada in the 1800s

The flintlock was finally replaced in the first half of the 19th century. In 1807, Scottish clergyman Alexander Forsyth patented a lock that used a small quantity of fulminate to ignite the main charge. By 1818, this innovation rapidly led to the invention of the percussion cap, followed by the separate primed paper or metallic cartridge around 1821. This culminated in the creation of the self-contained cartridge around 1826.

Canadian gunmakers were quick to embrace these new firearm technologies and began to develop improvements of their own. The first guns made in Canada date back to the 1830s. William Gurd of York (today’s Toronto) built guns that had locks converted from flintlocks. J. Woods of Brantford made pistols and rifles marked with an Upper Canada address that show Woods owned a “Rifle Factory” that dates back to before 1840.

While there were Canadian gun manufacturers, the majority of firearms used in Canada were imported from England or the US. At the time, Britain was a producer of fine shotguns and the US cornered the market on rifles. Pistols and revolvers were shipped into Canada from both countries. In 1866, Smith and Wesson, the large revolver manufacturers of Springfield, Massachusetts, first advertised their firearms in the Vindicator, a local newspaper in Oshawa, Ontario.

A Right to Bear Arms

Did you know that up until the late twentieth century, private gun ownership was seen as vital for defending Canada against external aggression?

In fact, almost every adult male had to enlist in the militia and bring their own firearm to protect citizens against domestic threats.

When the early British settlers came to Canada, there was no standing army or modern police service. Thus, personal and national security alike was dependant on civilian gun ownership and the right to bear arms was seen as fundamental, even in Canada.

In 1867, Canada had a hand in trying to solve one of the most significant difficulties in perfecting a breech-loading gun: the escape of gas. Dudley Booth of Ottawa invented a breech loader and its cartridge to help prevent the escape of gas through the breech. Unfortunately, Booth’s attempt was unsuccessful.

Many other Canadians also obtained patents for breech-loading guns between 1850-1880. Although a few of these gained local acceptance, none of them achieved national recognition.

Finally, the problem was solved with the advent of a thin-walled metallic cartridge that expanded to generate a seal and then contracted once the gas had left the barrel. This enabled the removal of the cartridge case. The development of the cartridge occurred mainly in the US, Britain, and France.

The Evolution of the Firearm

In 1892, the first automatic pistol was invented by Joseph Laumann, from Austria. This was followed by the creation of the Borchardt pistol in 1893 as the first automatic with a separate magazine in the grip. Even today, this is a defining feature of this breed of firearm.

Once these automatic weapons hit the market, more automatics were produced in rapid succession (Little joke there…), such as the Browning, Luger, Mauser, and Colt models. By the 1900s, automatic weapons were firmly established, marking the end of the historical firearms period.

If you’re an avid gun-enthusiast or a history buff, then you’ll want to check out GTA Guns auctions. Our online auctions attract over 65,000 buyers and sellers from all over North America who are looking to track down some real beauties!

Not only can you find many unique antique pieces to add to your collection, but here at GTA Guns, we offer professional gun appraisals and firearms valuations.

So, if you have a few historical firearms in your collection, our knowledgeable and experienced team of firearms specialists can help. We’ll give you a fair opinion of their value through extensive research and analysis.

Don’t hesitate to reach out to us today. We’re more than happy to answer any questions you might have about our online auctions or other services.