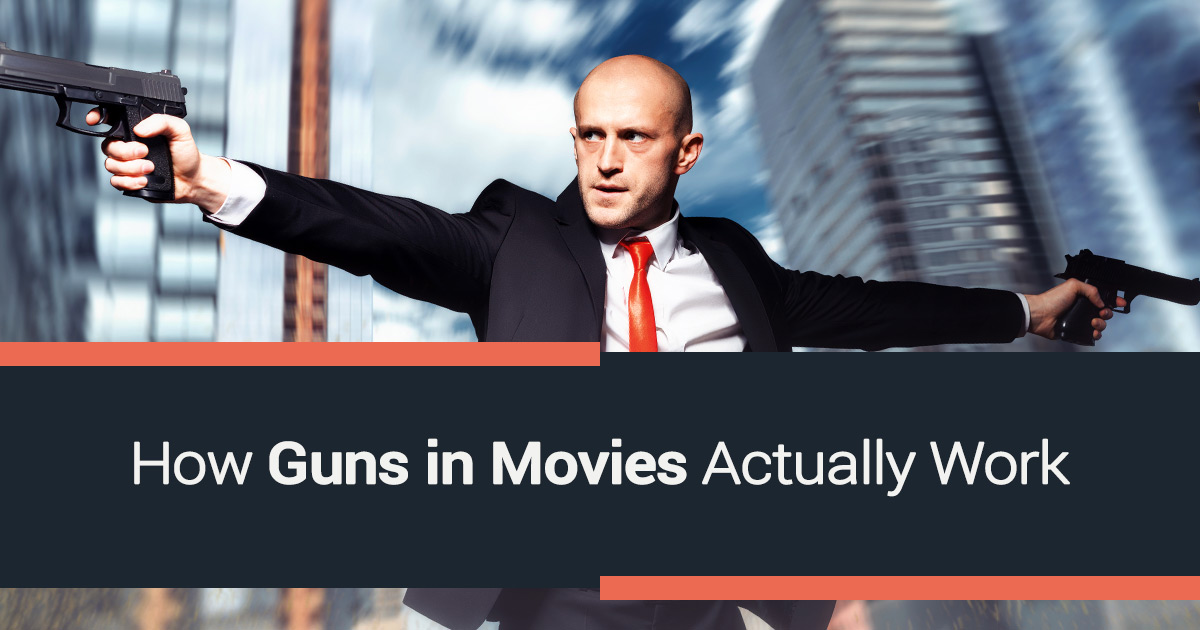 Can you imagine how boring action movies would be without guns?

There’s nothing more exhilarating than a perfectly choreographed gunfight in a movie. Whether its a shootout at the O.K. Corral or Sylvester Stallone shooting down bad guys in the jungle, guns and movies go hand-in-hand. And just like most things in the movies, firearms in the hand of the hero seem to do impossible things. They never need to be reloaded! They never jam! And the hero always has perfect aim! In the real world, not so much.

But that’s the fantasy, with much of the gunplay merely being an illusion or special effects. So, how do guns really work when they’re shooting a movie? Well, it depends…

Years ago during the filming of The Crow, Brandon Lee was tragically and accidentally shot during a scene. Although the gun being used was supposed to fire “blanks” (a cartridge containing gunpowder but no bullet), the tip of a real bullet was accidentally left in the chamber after the filming of an earlier scene of the gun being loaded. The blank, which by itself couldn’t hurt anyone, discharged the tip of the bullet, killing Lee. Since then, gun safety standards on movie sets have been made considerably tighter.

Today, film guns could be anything from prop replicas, to rubber stand-ins, to modified real firearms, to CGI. It all depends on the budget of a film and the director’s vision. Some things, however, are always the same. If a firearm or firearm stand-in is ever going to be used in a scene, a weapons master must be on set supervising it. A weapons master is essentially a prop master, but specifically for the real modified or prop firearms used in the movie.

For years now, a scene with a gunshot in it would be filmed somewhat like this. The weapons master would inspect all of the firearms or props to be used to guarantee that they’re functioning correctly and are not loaded with actual bullets. Then comes dozens of rehearsals to ensure that the actors know exactly where they need to stand and when they need to “fire.” The actor holding the modified firearm would aim it slightly to the left or the right of their “target,” ensuring that, even if it went off with a real bullet, that it would miss. Once the “gun” is “fired,” special effects take over and “squibs” (small packs filled with fake blood) placed underneath the target’s shirt would explode, simulating the appearance of a gunshot wound. Someone calls “Cut,” and the director and weapons master checks in to make sure that everything went without a hitch.

Today, things can be a little different, especially if it’s a high-budget film. The weapons master would still check the prop replica firearms, and the actor would still aim away from the target, but CGI would handle much of the rest. CGI gun flashes and gunshot wounds have become the standard for most big-budget pictures. That said, many weapons masters and professional special effects guys feel that CGI can never truly replace the realistic effects of a blank being fired or a squib going off.

If it’s a science-fiction film, often the weapons master must create brand-new guns that will fit into the world being created. Firearms like the pulse rifle in Alien or Han Solo’s blaster are perfect examples of these guns. Just like the actual firearms used in movies, they must not be able to fire real bullets and instead be set up to use blanks.

What About Background Performers Who Are Holding Guns?

Generally, extras who are running around in the background will not be given modified or prop firearms as they would not have the training required to use them (and just think of the insurance costs…) Instead, they’re usually given realistic-looking rubber replicas of the firearms. Up close, these wouldn’t hold up to scrutiny, but in the background of a movie, they look just fine.

The bottom line about how guns work in movies isn’t all that different from how they work in real life. There are tons of safety precautions and training required, and one wrong move could mean injury to those around you. The filmmakers need all of their modified real and prop firearms to be working in perfect condition to guarantee the safety of everyone.

Although we don’t sell modified guns or prop replicas here at GTA Guns, you can get your hands on some absolutely beautiful firearms that LOOK like they could be in a movie! Please get in touch with GTA Guns today, and we can answer any questions you may have about our firearms auctions or other services! We look forward to selling you the firearm that you’ve been looking for!