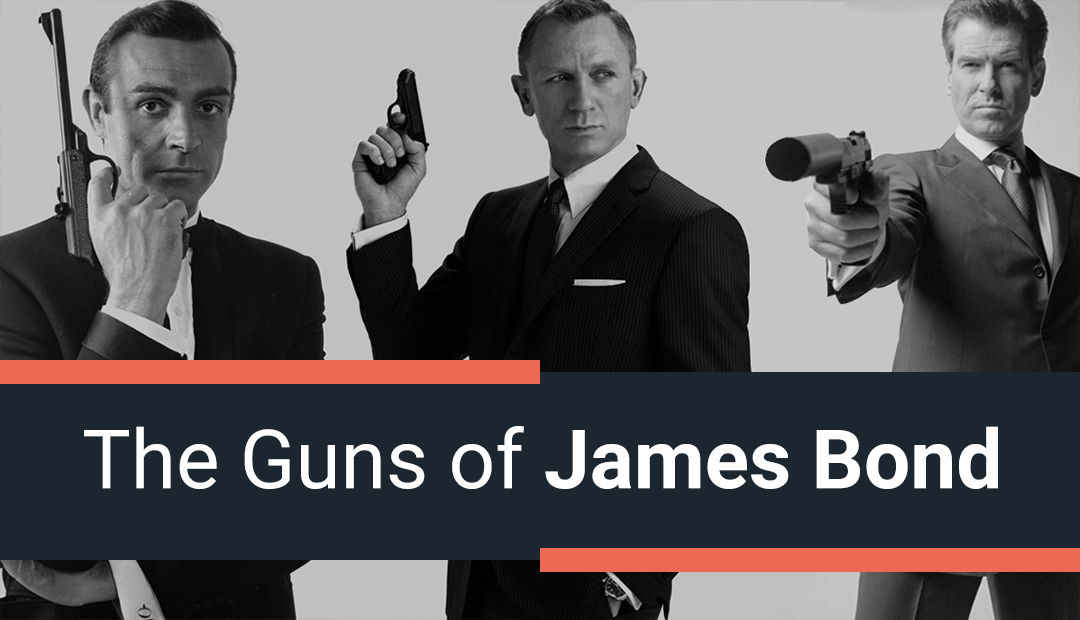 Say those words to anyone in the world and they know exactly what you’re talking about. The James Bond franchise has arguably impacted movie and popular culture more than any other film. Every single spy film, no matter how good or original, owes the 007 films a huge debt. Played by 5 actors over the last 50+ years, Bond shows no signs of slowing down in his “old age”. Full of humour, action, romance, space-age gadgets, and violence, everybody loves a good Bond film, especially fans of firearms!

Here are some of the most iconic and cool guns used by James Bond and his villains:

Any list of iconic James Bond weapons has to begin with his trusty Walther PPK. When you picture Bond, you probably picture him holding this gun. It’s his trademark weapon. And, funny enough, he originally didn’t want it! In this scene, Bond is forced to give up his previous favourite sidearm, a Beretta M1934. We’re sure that he’ll get over it.

Great movie. Great shot. You’ll have to suspend your disbelief that this shot could have been achieved with just one round, not to mention the fact that the sound would have been deafening. The AR-7 isn’t exactly a sniper rifle. But it all comes together perfectly in this iconic 007 scene.

Although most of the guns on this list are used by Bond himself, we can’t help but include the gun of the gold-obsessed Goldfinger. His gold plated Colt Official Police is a beautiful gun, but ends up being his downfall when he learns why you should never shoot a gun on a plane.

Also worth mentioning in Goldfinger is the Colt Official Police revolver with a gold-plated finish and ivory grips which Auric Goldfinger carried while disguised as a U.S. Army Colonel and used to shoot at Mr. Ling.

Characteristic of Roger Moore, he was gentleman spy with a much lighter touch than Connery. But he still meant business with a gun. In this scene, Bond is offered the shotgun to shoot pheasant. He instead takes down a sniper in decidedly cool Bond fashion.

Timothy Dalton took command of his role as 007 right out of the gate, using this Walther WA 2000 sniper rifle to fire at a KGB sniper looking to take out a KGB defector. Dalton took the series in a decidedly darker direction after the campier years of Roger Moore. Sadly, he only got two kicks at the can before the Bond series was put on hold for six years due to rights issues.

With every new Bond comes a new sensibility. Pierce Brosnan brought together many of the qualities of previous Bonds, while bringing his own charm to the role. In this opening scene, we see him equipped with an AKS-74U, gunning down Soviets as he escapes a chemical weapons facility. ‘Nothing like a good opening scene from a Bond movie. *cue the theme music*

It’s important to note, however, that Brosnan’s Bond wasn’t issued that weapon. He picked it up and started using it. His weapon of issue was actually a Walther PPK. Also note that in this blog post’s featured image, Brosnan is using a Walther P99 with suppressor.

New Bond, new Walther. Or so people think. Actually, by the time Daniel Craig came on the scene, Pierce Brosnan had already used the Walther P99 in three other movies. It debuted in 1997 in Tomorrow Never Dies). However, the gun became particularly associated with Craig when he used it for the majority of the Casino Royale, including for his second kill, a cold-blooded assassination of a traitor to MI6. This movie definitely shows off a different kind of Bond, delivering exactly the shot in the arm that the series needed after falling into increasingly campier adventures.

Daniel Craig also uses a Heckler & Koch UMP9 at the end of Casino Royale and beginning of Quantum of Solace.

If you want an example of exactly how… well hardcore Craig’s Bond is, you can find plenty of examples in the popular Bond film, Skyfall. In this scene, we see James Bond miss his shot with an antique dueling pistol. And that’s the ONLY shot he misses in the scene.

Many of the more famous and extreme weapons from James Bond films aren’t real, but that doesn’t make them any less cool. The Golden Gun, an iconic firearm for anyone who is a fan of the series, is the prized possession of The Man with the Golden Gun’s main villain, Francisco Scaramanga, and you couldn’t possibly come up with a cooler weapon for the “bad guy”. It’s a single shot custom pistol that’s assembled from a golden lighter, pen, cigarette case, and cufflink. There’s also a bullet hidden in a belt buckle. The bullet is a 4.2 mm 23 carat gold dum-dum bullet.

The Golden Gun, disassembled, from the private collection of Dean Villafuerte.

The Golden Gun, assembled, from the private collection of Dean Villafuerte.

Special thanks to Jono Logan and Ontario James Bond enthusiasts Dean Villafuerte and Geoffrey Holmes for information and assistance with fact-checking for this article.

Do you have a favourite gun scene in a James Bond film? Leave us a comment!