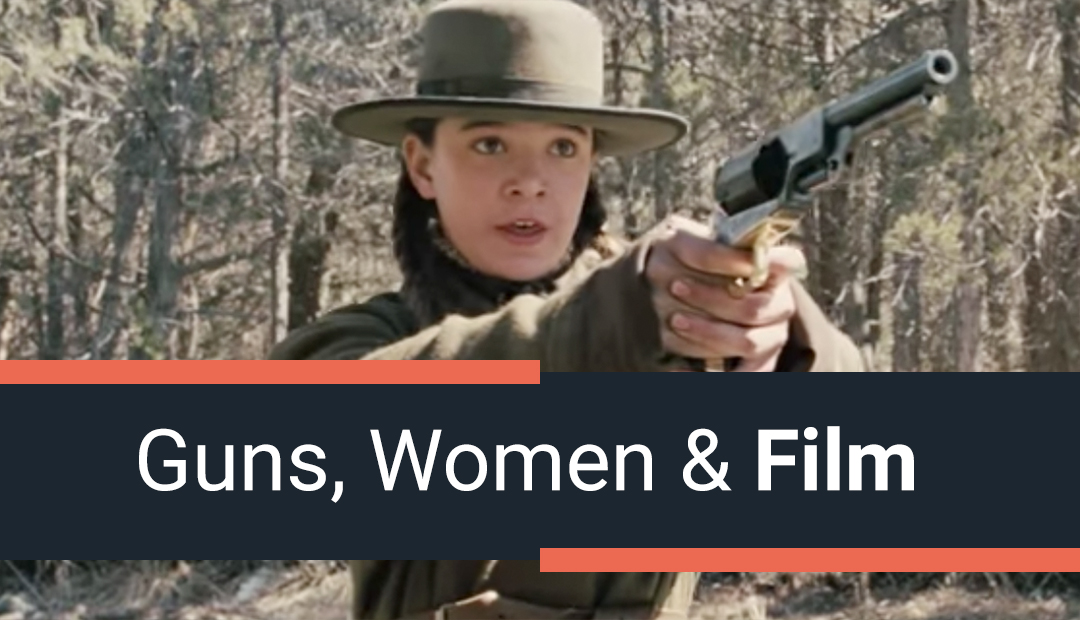 James Bond? Pfft! What about the ladies?

Action films, such as the Bond films, have a really bad habit of emphasizing the male hero at the expense of the female heroine. Often times, the female lead is treated like nothing but a hostage for the hero to save. It’s a trend that has thankfully been getting turned around in recent years, with women taking leading roles in action movies like Atomic Blond and Wonder Woman.  Female action heroes are on the rise! You give any of these women on this list a gun and there isn’t a movie villain that could stand up to them.

In The Quick and the Dead, Sam Raimi turns the old western cliche of “the stranger coming into town to settle old scores” on its head. “The Lady” (Sharon Stone) arrives in a small town to participate in a dueling competition. This is only a cover, as she secretly plans to kill the town’s leader (Gene Hackman) for reasons that remain hidden for most of the movie. “The Lady” mostly uses a EMF Hartford Single Action Army for her shooting and duels, but also uses a James Reid “My Friend” Knuckle Duster at one point in the movie in an attempt to kill Hackman. “The Lady” has style, precision, and an eye for some pretty fantastic firearms!

Max Max: Fury Road rebooted the old Mad Max series with innovative car chases in the desert and absolutely stunning action sequences. The character of Furiosa (Charlize Theron), with the help of Max, is on the run from a warlord trying to recapture her and other young female “breeders”. Throughout the film, she uses a ton of guns, but one of the most impressive has to be her Chinese SKS rifle (Type 56 Carbine), equipped with a long-range scope. In this clip, you can see her take down a number of her pursuers—and probably Max’s eardrum as well.

In True Grit, Mattie Ross (Hailee Steinfeld) is planning to avenge her father’s death with his own Colt Dragoon. Finding her father’s killer by a stream, Mattie takes out the gun with steely determination and aims. Now, a Colt Dragoon is a pretty heavy, powerful gun for a full grown adult, let alone a little girl, but when you look in her eye, you know that she means business.

In the grand tradition of grindhouse movies comes one of the most ridiculous uses of a machine gun ever put on film. Cherry Darling (Rose McGowan), while fighting zombies, has her leg torn off. It’s soon replaced with a wooden table leg. This wooden prosthetic leg breaks while she’s fighting yet more zombies. So, of course, the only logical solution is to then replace the prosthesis with a Bushmaster Carbine, fitted with a Cabray 37MM Launcher, and kill as many zombies as humanly possible! Grindhouse!

The Matrix is arguably one of the best action movies ever made, and its certainly been wildly influential. Not only does it have an incredible sci-fi plot, stunning kung fu battles, and some of the best gun fights ever put on film, it’s also one of the most quotable films of all time. The bullets and guns in this movie might be virtual, but they certainly do a heck of a lot of damage! In this iconic moment, Trinity (Carrie-Anne Moss) saves “The One” Neo by taking down a superfast, AI Agent with a single bullet to the head and one heck of a one-liner.

If you want a movie specifically about guns… this probably isn’t it. Swords are the weapon of choice for the vast majority of characters in this two-part film. However, in the second part, “The Bride” (Uma Thurman) has finally found Bill, the man who betrayed her, almost killed her, and stole her daughter. She believe that she’s about to kill him with her Star Firestar M-45, only to find a big surprise waiting for her…

Ever hear the phrase “Ginger Rogers did everything Fred Astaire did, except backwards and in high heels”? Well, that basically summed up the character of Agent Peggy Carter (Hayley Atwell) in Captain America: The First Avenger. Despite Captain America being artificially enhanced by a super soldier serum, Carter more than keeps up with him, basically doing everything that he does, but backwards and in heels! Thanks to Atwell’s charismatic performance (a perfect example of which is below), Peggy Carter went from being a minor comic book character to becoming a very popular recurring character throughout both Marvel Cinematic Universe.

Natasha “Black Widow” Romanova (Scarlett Johansson) is another recurring main character in a variety of Marvel movies, including Iron Man 2, Avengers, Avengers: Age of Ultron, Captain America: The Winter Soldier, and Captain America: Civil War. One of the world’s most accomplished spies, Black Widow is a master of all weapons, from psychological to firearms. In this scene, you get to see her wield a number of them, including one of her trusty Glock 26s, to try to bring the Hulk back into SHIELD.

So, who is your favourite gun-toting woman on this list? Is there someone that we missed? Please leave us a comment and give us your thoughts!