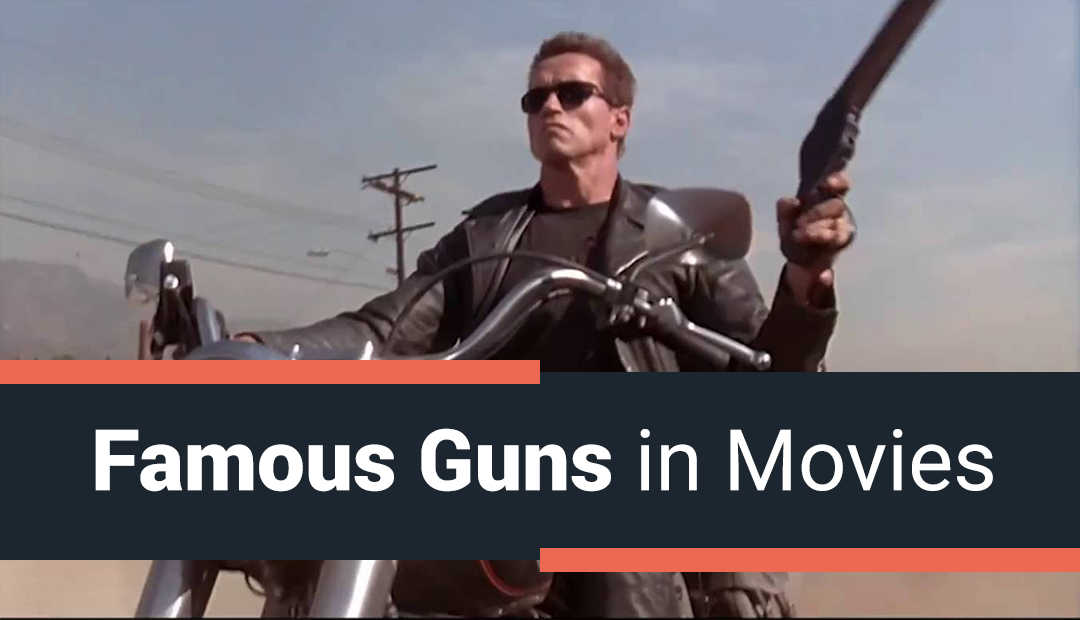 So, what’s your favourite movie?

Think of any great action movie and we bet that there will be an iconic and awesome gun in the hand of the hero. Often fantastical, movie guns have inspired imaginations, and probably toy sales, from the beginning of film right up to today. Here are some of the most awesome and famous guns in the history of filmmaking:

Even those who have never seen this movie before can quote this scene from Dirty Harry. One of the most badass moments in movie history, Clint Eastwood (already one of the biggest badasses ever) pulls out his Smith & Wesson .44 caliber revolver and issues one of the most iconic threats ever put on film.

It probably isn’t a surprise that another gun from a Clint Eastwood film is making an appearance on this list. This beautiful gun is used for a hilarious scene where Clint Eastwood’s character discovers that he’s just a bit out of practice when it comes to shooting. That’s no problem though, especially when you also have a W. Richards 10 Gauge Double Barreled Shotgun to do the same job.

Although the Evil Dead films are best known for their over-the-top humour and crazy amounts of blood and gore, the third film in the series takes a much more humourous tact. Main character Ash finds himself in medieval times with only his chainsaw hand and “boomstick” between him and the forces of evil. Funny enough, although he says his “boomstick” is a Remmington, any gun-lover could tell that it’s actually a sawed-off Stoeger IGA 20”. Come on continuity!

This is another movie that can even be quoted by those who haven’t even seen it. Scarface is a fantastic crime film, with one of the best performances ever by Al Pacino. The “little friend” comes out in the last scene in the movie as Tony Montana is cornered in his office by one of his rivals.

There’s a funny bit of trivia about this gun though. Although the gun itself is real, the M203 grenade launcher attached to it is VERY fake. That being said, it still makes for a pretty awesome gun and a fantastic scene.

In this remake of the 60s classic western, little Mattie Ross is equipped with her dead father’s Colt Dragoon. The 14-year old can barely lift the thing, let alone use it properly, but still, take a look at the steely determination in her eyes as she aims it. Now THAT is true grit!

Love, murder, and bank robbing are perfectly illustrated in one of the best crime films of the 60s, Bonnie and Clyde. Two of the biggest stars of their day, Faye Dunaway and Warren Beatty, play lovebird bank robbers Bonnie Parker and Clyde Barrow. Although the model of Tommy Gun shown in this scene was also used during the film in an earlier shootout, few movie scenes so effectively demonstrate the power and brutality of guns like this last scene from the film. (Beware spoilers.)

The first 30 minutes or so of Full Metal Jacket is one of the most accurate portrayals of military training ever put on film. In this scene, the Rifleman’s Creed is repeated by every recruit. This creed takes on a much darker tone later in the film when one of the recruits, Private Leonard “Gomer Pyle” Lawrence, cracks under the pressure and… well, you’ll have to see the movie to find out what happens. We highly recommend it!

One of the best action movies of the 80s—actually, one of the best action films EVER—is Die Hard. Perfectly structured, with a brilliant mix of action, humour, and one of Bruce Willis’ coolest performances, Die Hard is a must-watch for action movie fans. We’d also go so far as to also call it the greatest Christmas movie ever! Character John McClane’s trusty Beretta 92F plays a huge role in the film, as scene in this boardroom shootout.

Few actors are as identified with a role as Arnold Schwarzenegger is with the T-800 Terminator. After a bone-chilling role as the villain of the first Terminator movie, the T-800 became a hero in T2. One of the best fakeouts in action film history is when the T-800 starts to walk towards John Conner, seemingly about to kill him with his sawed-off, 120 gauge, lever-action shotgun, only to say “Get down.” He then takes a shot at the real threat, the T-1000 Terminator.

For one scene where the gun was to be loaded on camera, a dummy bullet with the powder charge removed was placed into the gun. When “fired”, the bullet entered the chamber of the gun with virtually no force and became stuck. In a later scene, the same gun was loaded with blanks, but was improperly inspected before filming. This meant that there was a real bullet stuck in the barrel when the blanks (live powder charges and primers but no bullets) were loaded into the gun. As soon as it was fired, the blanks provided the force necessary to dislodge the bullet in the barrel and Brandon Lee was shot with almost the same force as an actual .44 Magnum. This is the scene where the terrible accident happened, although his actual death is NOT part of the scene.

As real gun enthusiasts and gun auctioneers for the Greater Toronto Area, we should probably leave the list there with the best real guns in movies. However, just for fun, we can’t resist adding a few fictional guns to the list!

In one of the most effective introductory scenes in movie history, Han Solo shows Greedo exactly what happens when you threaten him. With his heavily modified DL-44 heavy blaster pistol at his side, Harrison Ford walked through four Star Wars movies as the pinnacle of cool, taking out every Stormtrooper that came into sight.

Oh, and we feel that we have to say… Han shot first.

Bigger is better? There are many gun-lovers out there who would happily disagree with that notion, including Agent J from the Men in Black trilogy. Given the “noisy cricket” as a joke by his partner Agent K, he soon discovers that it packs more of a punch than he originally thought. Although he gets a slightly bigger weapon at the end of the movie, we’re pretty in love with the adorable, and powerful, noisy cricket.

Blade Runner sends the viewer into the far-flung, dystopian future of 2019—
Anyone else feel old around here?—where humanoid androids threaten the innocent people of LA. Harrison Ford (making another appearance on this list) plays a blade runner, a cop assigned to “retire” these androids with an iconic film prop constructed from a Steyr Mannlicher .222 Model SL and a Charter Arms Bulldog Revolver, modified with some really snappy LED lights. The entire movie projects a believable future (for 1982), with this equally believable firearm.

In Alien, Sigourney Weaver and Ridley Scott created one of the most iconic women in film with Ellen Ripley. A hero through and through, she needed a weapon to equal the threat she faced in the first movie of the Aliens series. Although she wielded a number of iconic weapons through the series, for our money, the B41A Pulse Rifle is the most believable and iconic weapon for taking down any gut-busting aliens.

Ghostbusters in 1984 inspired an entire generation of kids to run around in the backyards with their friends “busting ghosts”. And a major part of that was the signature “weapon” of the Ghostbusters: the Proton Pack. These unlicensed nuclear accelerators are responsible for causing insane amounts of destruction, fire, and laugher. Who ya gonna call?

Oh, and if you are sitting there thinking, “Hey, they didn’t mention any guns from James Bond!”, just you wait… We have another blog post in store specifically on that topic!