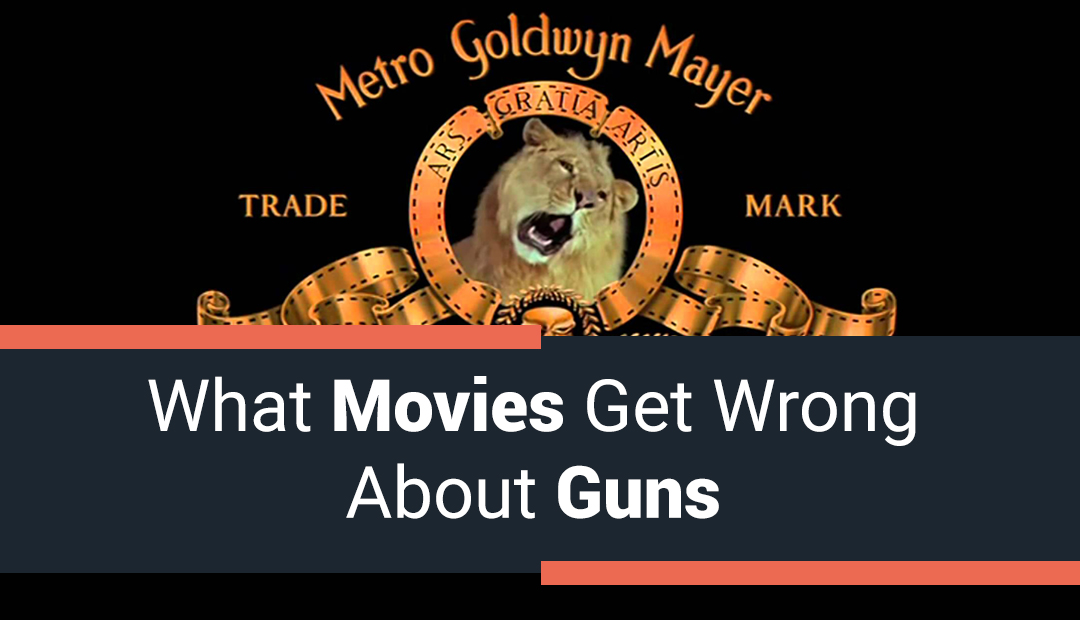 Have you ever seen a gun fight in a movie and think, “Yeah, right! That’s impossible!”?

Guns in movies, especially action movies, behave very differently from guns in the real world. The fact is, movies just get a lot of things wrong about guns! From their bullet capacity, to their ability to make just about anything blow up, here are some of the most common movie gun mistakes that you can find in action films.

(Heads up, the videos that follow aren’t for the faint of heart. There’s quite a bit of violence in these clips, as you might expect from action movies. Viewer discretion is advised!)

Here are 5 things movies get wrong about guns… plus a bonus error you’ll be sure to want to make note of.

Hey, you know that thing about guns where you have to reload? Not in the movies you don’t!

Many action films, especially from the 80s, had a “bottomless clip” rule when it came to gunplay. As long as the hero was shooting, there were unlimited bullets. Movies like Commando, starring Arnold Schwarzenegger, or Rambo, starring Sylvester Stallone, are infamous for this.

I don’t think we need to explain why this gun movie trope is wrong. Gun owners already understand that there are a limited number of bullets in a clip. Still, wouldn’t it be neat if there was such a thing as an unlimited clip?

Hearing loss doesn’t seem to be a thing in action movies. In massive gun fights, heroes fire endless bullets from handguns, automatic rifles, and shotguns and walk away without so much as a ringing in their ears.

As we all know, ear protection is one of the most important aspects of gun safety, especially when you’re in an enclosed space. The fact that John McClane doesn’t have permanent hearing damage after repeatedly firing a gun inches away from his ears might be one of the most unbelievable things in Die Hard. And there are a LOT of unbelievable things in Die Hard—though it’s still an awesome movie!

Of course, if you’re worried about hearing loss, you could always put a silencer or suppressor on your gun right? That’ll make a gunshot as quiet as a whisper… Well, no, not really.

Silencers and suppressors do muffle the sound of gunshots, sometimes by a considerable amount. But it’s impossible to completely eliminate the sound of gunfire. In most films, a silencer simply makes a quiet “phew” sound effect, not alerting anyone in the vicinity that a gun has gone off. Any pro will tell you that real silencers just don’t work like that.

Silencers are a staple in spy films, and when you think of spy films, you think of James Bond. In this clip from Dr. No, Bond shows just how quietly you can shoot a man with a silencer… in the movies, that is.

Did you know that if you shoot a car, it will explode? Oh, and it doesn’t matter what part of the car you shoot either; the trunk, the tires, even the rearview mirror. Shoot a car with the intent of blowing it up and *KABOOM*! That’s the convenience of living in an action movie.

Here’s a perfect example of shooting to cause an explosion in the movie Bad Boys 2. Just skip ahead to 2:25 if you want to get closer to the explosion!

5. You Can Use Anything as Cover

Oddly, although movie bullets can blow up cars, it seems like they can’t actually penetrate anything else. If you need cover from gunfire in a movie, you can literally jump behind anything. A kitchen counter, a couch, even an aluminum trash car, and you can rest assured that you’ll be safe… In the movies.

Try firing a gun at a trash can in the real world, however, and it would be a different story. The idea that someone could hide behind an inch of cover and be protected from a machine gun, shotgun, or even a handgun is completely ridiculous.

If you want one of the most extreme examples of this, check out this clip from Point Grosse Blank where bullets are stopped by, wait for it… bags of potato chips!

Mind you, this is all in good fun! We love action movies and cinematic gunfights. You just have to suspend your disbelief for a little while and you can be wildly entertained by the cinematic interpretation of gunfire. Don’t get hung up on obvious mistakes or errors, it’s all in good fun! It’s a fantasy.

Another movie gun myth is how ridiculously guns are stored. They’re kept in bedside tables or kept loaded and ready to go under the bed. In the real world, you need far safer and secure conditions for gun storage. By exploring the gun storage options here at GTA Guns, you know that your firearms will be kept safe in a highly-secure and insured facility where you have ready access whenever you need them.