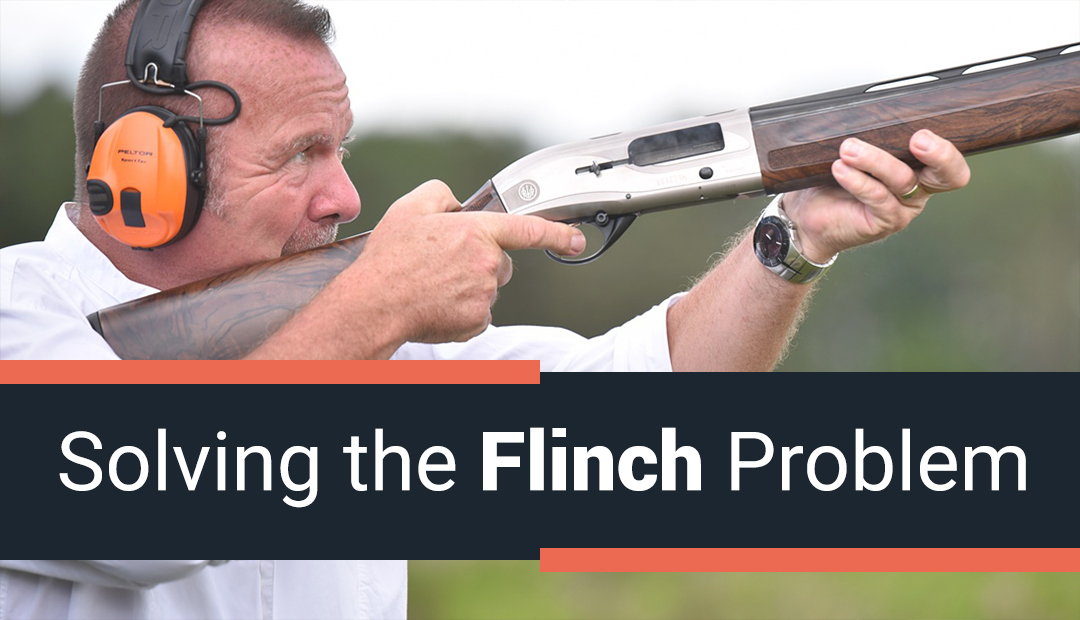 If you want to improve your handgun or rifle shooting, at some point you’re going to run into the issue of flinching. There tends to be a lot of shame and self-denial involved with this problem, but every shooter deals with it at some point. So man up and admit that there’s at least a chance that you might not be an exception to the rule, and that you might have to address it at some point in your development as a shooter. So, egos aside, let’s look at how to cure a flinch so we can start shooting better.

Once you’ve come to terms with the tragic truth that your shooting may at least occasionally be affected by flinching, the next step is to understand what exactly we mean by the term “flinch”, and why it’s detrimental to marksmanship.

Flinching is making an instinctive quick, nervous movement. Whether it’s a recoil anticipation or flinching after the shot, there are basically two avenues to approach curing a flinch problem: mental and physical. You can wage psychological warfare on yourself and try to trick or re-condition your brain’s response to the stimuli experienced when firing a gun, or you can attack the problem at its root and try mitigating those physical stimuli.

There’s not really one catch-all solution, and most people find success with a blended approach. Since the internet always love a good list, here are eight specific tips for curing your flinch.

One of the reasons we flinch is that our brains just aren’t accustomed to recoil and muzzle blast. Rapid fire can exacerbate this problem, and the increased noise and pressure from multiple shots in quick succession can easily throw you off and cause a flinch response to start creeping in.

This automatic response usually fades as you get more rounds down range and practice more frequently. If you can’t shake it after a time, try moving up to just a couple of feet from the berm and run few strings of rapid fire into the dirt. Don’t worry about aiming, just watch the slide cycle and brass eject. Look at the gun from different angles as it fires.

With this exercise, you’re basically removing the pressure of firing accurately and instead, your focus is on “getting used to” the sensations associated with firing the gun.

It’s always easier to break a bad habit by replacing it with a good habit rather than trying to make yourself not do something. Like many people, when I personally struggle with flinching, it usually comes in the form of blinking just as the shot breaks, accompanied by a slight downward movement of the muzzle. I’ve found that the best way for me to overcome this is to give my eyes another job to do so that they can’t blink.

It just so happens that front sight focus is key to accurate shooting, so before I pull the trigger, I decide that I must track the movement of the front sight at all costs. Without fail, whenever I keep this in the forefront of my mind, the blinking disappears and with it, the unwanted muzzle movement.

The most well-known method for trying to cure a flinch is the ball and dummy drill. Have a friend load or not load your gun for you. In this way, you will not know if the gun is going to fire. If it does not, you will clearly know if you are flinching and if so, feel like, well, a dummy. Have the friend continue until you no longer flinch on the dry fires.

No amount of mental trickery will help you get over a flinch if you have poor fundamentals, especially grip and stance. If you have a low grip or loose grip, or if you’re not leaning into the gun enough, you’re just amplifying the effects of recoil, and that can make your flinch worse.

It could be that you don’t flinch that badly, but you’re exhibiting some of the same symptoms of flinching by lack of trigger control. Try lots of dry fire practice until you can consistently squeeze the trigger without moving the sights, especially if you have a long, heavy double action trigger.

I usually don’t like to immediately jump to “buy a different gun” as the easy fix for most problems, but sometimes that really is the best approach. Don’t rule out stepping down to a smaller caliber if it allows you to shoot the gun more quickly, more accurately, and flinch-free.

As an alternative to completely ditching a problem gun, modifications to the grip can go a long way, such as the addition of grip tape for added traction, or a grip sleeve to soften sharp edges.

If you don’t have enough hearing protection, you’re almost guaranteed to develop a flinch — I’ve noticed this especially with indoor ranges, which can be extremely loud. Make sure your ear protection has a good seal, and you can always double up and use both earplugs and muffs simultaneously. You might be surprised at how much that can help.

There’s a fine balance between controlling the firearm and resisting the recoil. You can’t physically stop recoil from happening, and if you get tense and flex every muscle in your body from trying to do it anyway, you won’t shoot straight. Establish a good grip and just let the recoil happen. Concentrate on recovery and follow-through instead of preventing recoil from moving the gun.

These eight solutions are some of the quickest and easiest ways to alleviate problems caused by flinching or recoil anticipation. In the long run, it will take regular, intentional practice to remove any flinching at all. And even then, if you ever switch to a smaller gun or larger caliber, or when you make small changes to your grip or technique, you may start struggling with flinch response all over again. The key is to resist the temptation for this normal human reflex because it’s a source of embarrassment and discouragement. Be willing to admit when it’s an issue, and take aggressive steps in your training to overcome it and move on.